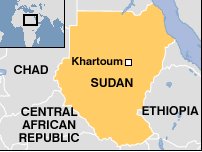 David was greatly distressed because the men were talking of stoning him; each one was bitter in spirit because of his sons and daughters. But David found strength in the Lord his God. 1 Samuel 30:6

At this time in David’s reign—to put it mildly—he wasn’t well liked. We’ve all had those kinds of days. And to be fair, there are times that we haven’t liked people that much. Those who were against David wanted blood. Amidst all that anguish and strife, David could say that he found strength in the Lord his God. The correlation to our own lives is obvious but I think we need to step it up a notch.

As I’ve written in this space before, millions of Christians face situations similar to David’s. Many want the blood of Christians. We need to pray for our Brothers and Sisters that they will find strength in the Lord their God. Their very lives may depend on our prayers.

Pray for the nation of Sudan. Darfur gets most of the attention out of all the news coming out of Sudan, but Sudan is a very large country. After 20+ years of civil war, there is trouble once again. Pray for those in the towns of Wau, Bir Di, Bor, Rumbek, Waat, Akelo, and the capital of the South, Juba (to name a few).

Pray that they too will find strength in the Lord their God.

Voice of the Martyrs